For the Project Lead the Way STEM Engineering program at Walton, our cohort spends senior year engaging in a capstone project for the Engineering Design & Development class, in which we identify and attempt to solve a real-world issue of any topic. Each group consists of three or four members who work together to create the prototype, along the way researching/finding experts, presenting to our peers & panelists, and iterating through viable solutions/testing plans.

According to Joe Dunlop, a Waste Reduction Administrator in Athens, GA, plastic bags are the #1 cause of tangles in recycling machinery. Plastic bags and other films cost the Athens facility ~60-90 min. each shift in debagging and the San Jose facility ~$1 million in damages to recycling equipment annually.

After identifying the problem, we drew up some ideas on how to tackle it-- each of us drafted around twenty of these sketches. We then each chose three designs to fully flush out in annotated sketches. The design below, for example, was modeled with the intent to allow for detachable electromagnetic teeth- in the event of a tangle, the gear could easily be hot-swapped or have the teeth replaced by simply disengaging the electromagnet: 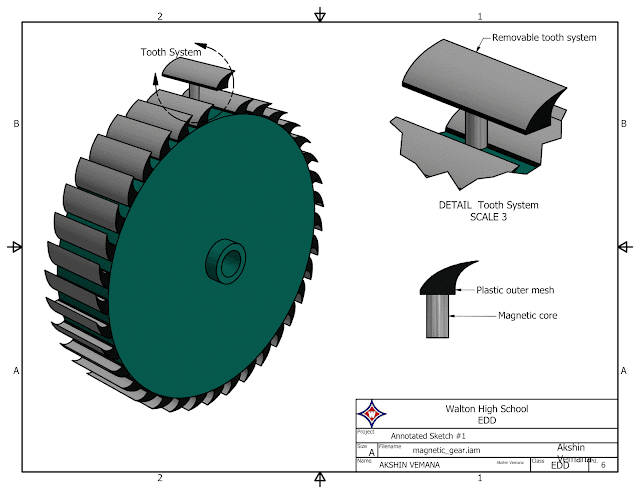 We did further research on a few of the ideas we liked by contacting experts gathering additional sources, and then creating basic mock-ups. For example, here is a test we did to see if a fan would blow varied pieces of trash to different distances and therefore separate them. Here is another test to see if centripetal forces could separate trash by density (slightly impractical, but worth a shot). I even 3D printed the tangling gear prototype (without the magnetic portion) to see if it would catch on plastic films.
We used our findings in a decision matrix to determine what we would continue to develop. This was something we ended up presenting on, but we concluded that our two best ideas were the "robotic gripper" and the "belt widener." Lucky for us, these two concepts work well in tandem.
The next step was prototyping each idea and developing a test plan to evaluate its effectiveness. This is what we've been working on for the majority of second semester. For each prototype, we developed a test plan, peer evaluated, then rewrote to match our design criteria.
And then began the prototyping...

First, we devised a combined system, of which each of us would develop a portion. The four parts were a shaking conveyor belt, a computer vision system, a delta-style robotic arm, and a claw subsystem. The concept was that the trash would move to the computer vision system, where films would be detected and then removed by a robotic arm equipped with the claw subsystem.

I decided to take on the computer vision subsystem. Based on some rough calculations using actual data from recycling facilities, our goal for the prototype system was to remove 400 plastic film items per hour, which necessitates about 7/min, or one every 9 seconds. For a proof-of-concept, I decided the minimum viable product necessary for the computer vision prototype would be a simple classification algorithm. Since we knew that image segmentation algorithms already exist, what we needed to prove was that an algorithm could successfully differentiate between films and other plastics, and not necessarily that the algorithm can locate the film itself; there is no need to reinvent the wheel, a mantra that our teacher repeated more than a few times.
This was one of my first real experiences with computer vision, so it took me months to figure out how to progress and what to attempt. In the end, I trained a ResNet-34 CNN for the task, roughly basing the algorithm on a Collin Ching's attempt at towardsdatascience. Luckily, there was a publicly-available dataset called "TrashNet" with approximately 2,500 images of trash, so I was able to focus on the algorithm and worry less about the data collection. Here are some examples of the dataset's images: 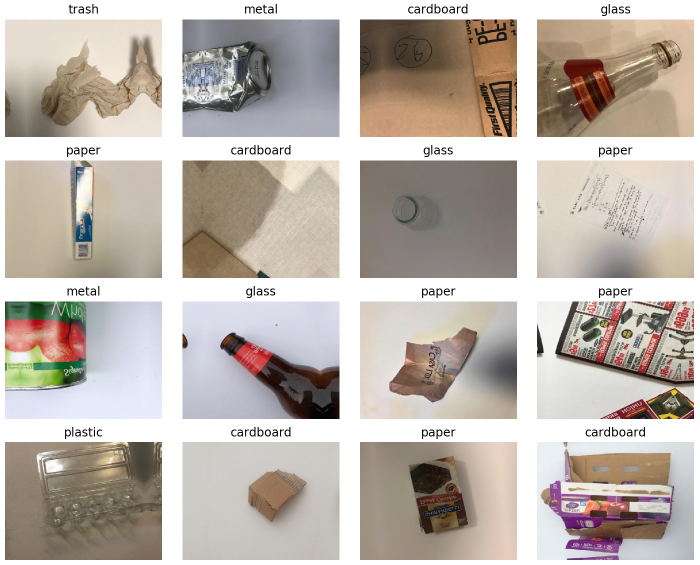 I augmented the dataset using changes in rotation, scale, and brightness. In the end, the algorithm was able to perform with approximately 92% accuracy.

While I worked on this, my other three teammates focused on their own prototypes.

This was one of the more complete final prototypes by the end of the project. The concept was that the conveyor would distribute the waste and make it easier to detect plastic films using the computer vision system- in a normal waste stream, the trash could be layered on top of other trash, obscuring plastic films and therefore reducing our overall accuracy. Since we know that shaking tables exist already, we didn't need to develop that part- we decided to replicate that by placing the system on linear sliders and manually shaking the belt. The belt itself, however, would need to be built if we were to test the final system, so my teammate modified a budget-friendly design on Instructables for our purposes.
Here is a video of the belt in action:

The claw subsystem was rather simple in theory, but ran into a few complications as we continued. For one, our goal was to prevent tangles in machinery, so if the claw were to destroy or mangle the plastic film, it would just cause more issues down the line. Our final claw would need to pick up the plastic film—even if it was under other pieces of trash—in one clean motion, hold on to the film for a few seconds while in motion, and cleanly deposit the film in a different location. My teammate successfully created a 3D-printed prototype claw and demoed the system manually (so as to test just one system at a time). He was successfully able to pick up, hold, and deposit the films with the claw subsystem utilizing a spare VEX motor. The video has his face in it, so in the interest of anonymity I will not include it in this blog post.

The arm was no doubt the most difficult part of the project, but arguably also the most crucial. We opted for a delta-style robotic arm rather than a traditional articulated or Cartesian setup because our prototype would primarily need to move in just the XY dimension, meaning that a delta system would be quicker. I happened to have some spare delta-style 3D printer parts, so we designed a system around these parts but with an arm in mind rather than an extruder/hot end. We ordered the parts, but unfortunately were unable to finish building the system due to the present quarantine. I will upload the CAD files when I get the chance.

In the end, we were unable to complete a final test because of the current situation regarding coronavirus. In the interests of social distancing, we decided to come to a draft, hypothetical conclusion that our system could plausibly work—each individual prototype showed merit (and our conveyor/claw systems functioned pretty much perfectly as intended), but there were some overarching issues we never addressed. For example, for a final prototype, we would need to cohesively combine all four prototypes with a single firmware, which we never were able to attempt. The actual picking of the plastic films would require calculations involving conveyor and arm speed as well as more precise detection of the location of plastic films; a targeting subsystem for the computer vision prototype would, for example, need to target the main body of a plastic bag and not the handles in order for the claw to properly grab the film.

In the end, I think this project served more as a learning opportunity than a viable product. Aside from more obvious things, like learning how to code a CNN classifier, I learned that when contacting experts, I need to try a wide variety of experts in different fields, and that contacting more people may be better- the majority of experts simply didn't have the time to respond. Given the time and budget we were given (our loose change and about seven months of intermittent work), as well as our relative skill levels, I think that this project was a bit too large of an undertaking.
EDD Engineering Design & Development films image processing machine learning mechanical engineering plastic plastic films PLTW recycling trash